For the entirety of my trip, even during my planning before I left the UK, I’ve been excited about going to the epic Salar de Uyuni, the world’s largest salt flats and Bolivia’s most popular tourist attraction. Just from searching the name on Google images you can see how awe-inspiring the landscape is. I’d been quizzing each traveller I’d met who had already been there on what it’s like and which tour company they went with to make sure I had a truly amazing experience when I reached the salt flats myself.

Getting to Uyuni and choosing a tour company

Catching a bus from Sucre was the start of my adventure to Uyuni. Bolivia has a national holiday which basically translates as ‘no cars day’ – due to high pollution levels, one day a year there are no cars, buses and lorries on the roads in all the towns and cities across the country for 24 hours. This day was planned for a Sunday that I had intended to use to travel so I was forced into getting a night bus the Saturday before. I was on the second bus leaving Sucre at 8:30pm and was lucky that my bus was practically empty, giving me two seats to spread out on. I had expected the journey to take about 10 hours, arriving around 6:30am so it wouldn’t be worth booking a hostel for the night. I fell asleep without much problem and hardly realised when we’d stopped around 4am. I assumed this was a toilet stop as we didn’t have one on the bus, little did I know we had already arrived in Uyuni and I needed to vacate the bus asap. I wandered around in the freezing cold ghost town wearing thin cotton trousers and flip flops thanking God I’d downloaded a map and had my Lonely Planet bible on hand to find a hostel nearby.

After lying in until just before 10am, I ate the hostel breakfast and made some plans for finding the right tour provider to suit my needs. Uyuni is a very small town in the desert where most tours of the salt flats start from and consists of hostels, restaurants and hundreds of tour operators all offering variations on the same trip. So I did some research and made a list of my requirements.

I was looking for:

With the help of the LP bible and TripAdvisor I set out with a list of four operators to talk to, but seeing and it as a Sunday and a national holiday, this was harder than I thought it would be. My first stop, Cordillera Traveller, had a charismatic sales attendant and a good price (1220 bs) but no English speaking guides available so I unfortunately had to rule them out early on. Next I spoke to Red Planet, a high-end tour operator. They only did 3 day trips but had everything else on my list for 1450 bs. Next up on my list were Esmeralda Tours but their office was closed all day so I couldn’t get a quote from them in time to compare them with the rest. Finally, Salty Desert Aventures, number 1 on TripAdvisor, offered the same as Red Planet for 1250 bs. I wasn’t as convinced by their sales advisor but the reviews were really strong so I decided after comparing them with Red Planet to go with them. This took up most of the day and wasn’t an easy choice but I hoped I had made the right one.

The trip started at 10:30am the next day when I met my group for the next 3 days who I’d be sharing a jam-packed Toyota Land Cruiser with. My group was made up of a Belgium couple, a French girl and a British guy – we were all aged between 21 and 26 years old. Thankfully they turned out to be a great bunch of people and we all got on really well, mostly bonding through our dislike of the tour guide. This was probably the only negative of the trip for me – our guide was an idiot – but at least it kept us laughing for most of the trip and we had a great driver so we could fact check his information at least. 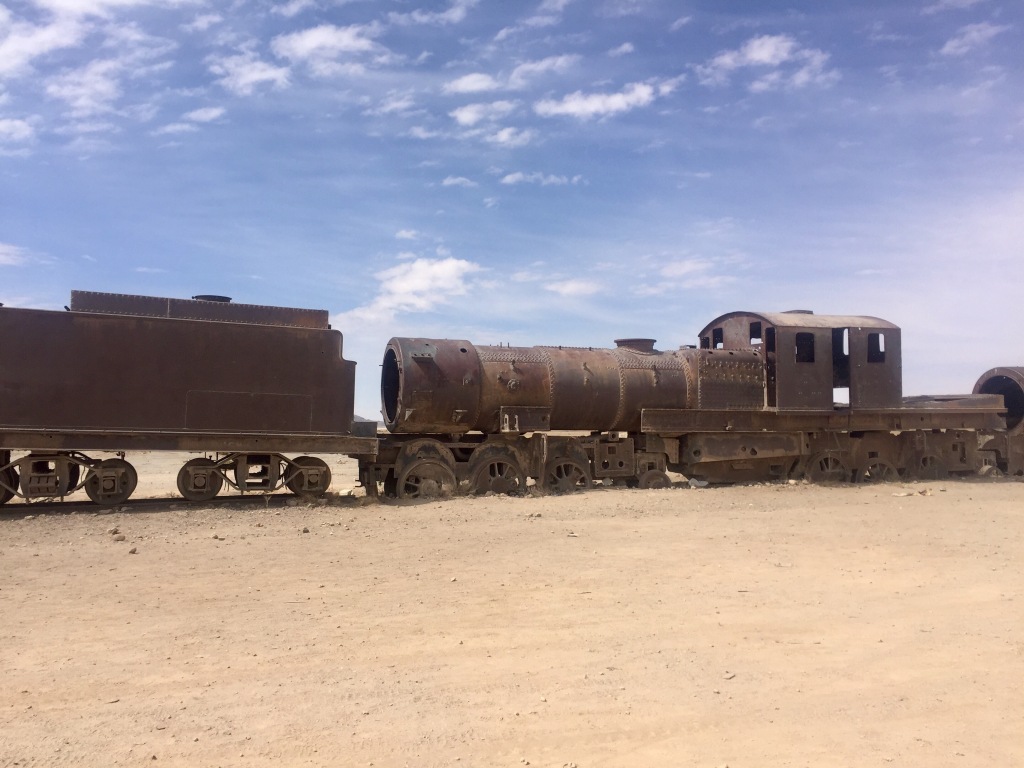 The route for the tour is pretty standard and you soon realise that all the cars go the same way and stop off at the same places for the majority of the three days. The first stop is a train graveyard which was really interesting to walk around and people were climbing on top of rusty trains in all directions. We only spent a short time here before driving to Colchani where the local community manufactures salt from the salt flats. We were briefly explained how the process works and watched a local man package salt. I would have liked to know more about this but the manufacturing isn’t done on a industrial level so perhaps there wasn’t that much more to know. 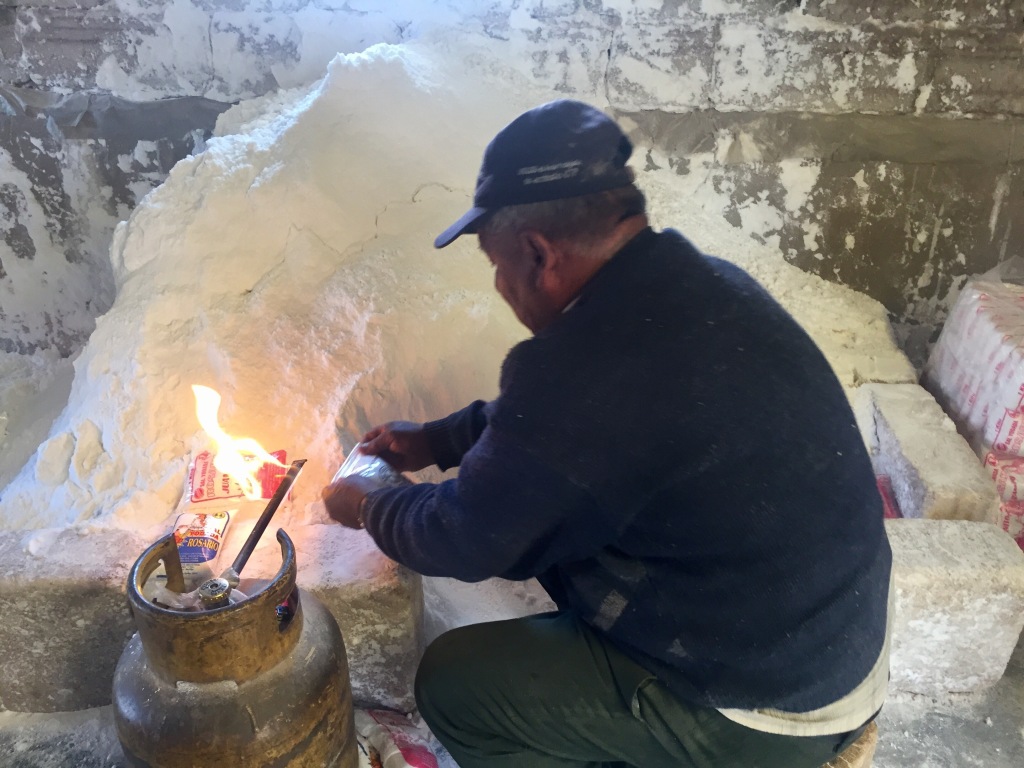 After lunch in Colchani, we headed off to see the salt flats themselves. I was so excited to finally see them after months of anticipation and they did not disappoint. It’s dry season in the salt flats at the moment so we could see the amazing polygon shapes formed by the salt crystals and had ample opportunities to take lots of fun perspective pictures. I could have spent hours taking pictures here and not gotten bored of looking of the amazing salt planes. I can’t describe how truly spectacular they were but hopefully some of the pictures managed to capture their magic. 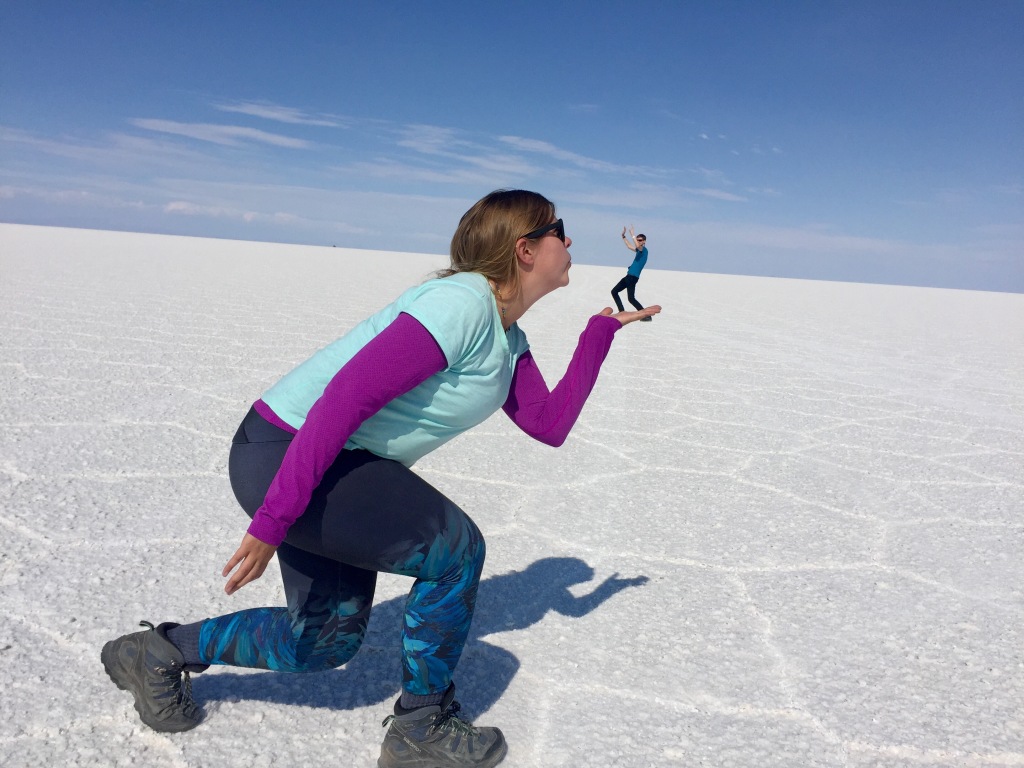 Next we went to Incahuasi Island which I would rename cactus island because it was covered in hundreds giant cacti – apparently they grow 1-2cm a year so they must have been hundreds of years old. The salt flats are caused by the evaporation of what would have been a sea within Bolivia so although not technically an island now, Incahuasi is surrounded by the salt flats like an island. We had plenty of time here to enjoy the amazing views, take pictures and relax in the warm weather before heading off to take sunset pictures on the salt flats.

Although it was cloudy, I took some great pictures here and I was sad to leave the salt flats so soon; the day had felt like a matter of seconds for me. Too soon we drove out of the salt flats and onto our accommodation for the first night, a hotel made out of salt with salt bricks and a crumbly, salty floor.

Day 2 – Lagoons, flamingos and the desert

The next day we were back into the car and off driving south, away from the salt flats and towards Chile. I was disappointed to only get one day, basically half a day, in the salt flats but that’s just how it is unless you book a bespoke tour and I don’t think I would have enjoyed this on my own. 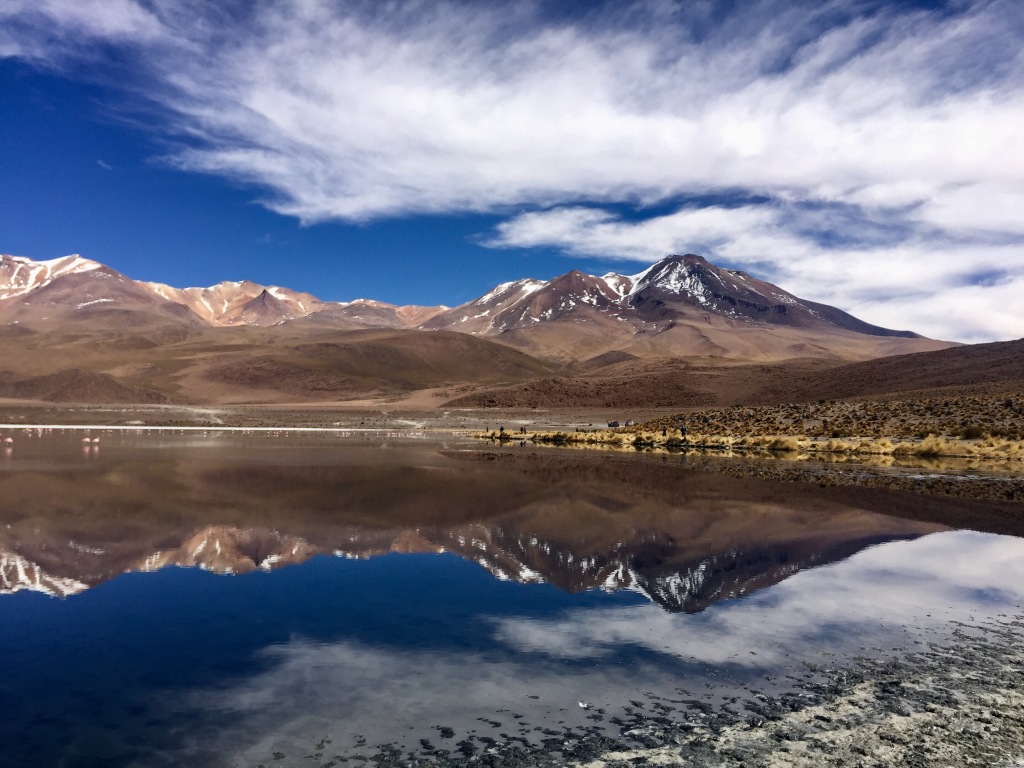 Now we were driving through high-altitude desert to lagoon after lagoon and rock formation after rock formation. The scenery was really impressive and like nothing I’d seen before on my trip or in my life. Although it did feel repetitive, they were all as amazing to see as the last and the novelty didn’t really wear off as they all had their own distinct differences. If I’m honest I can’t remember the names of all the lagoons but looking online, I think, we went to Laguna Cañapa first and saw loads of flamingos which we were able to get really close to. The lagoon was highly reflective and I could take some beautiful pictures of the surrounding mountains and volcanoes. At this point I wished I had my proper camera with me. Next we went to Laguna Hedionda (I think) which was similar but a much lighter colour of water so the reflection was different and the lagoon was larger. We had lunch here and the views were so tranquil that I almost forgot about missing the salt flats. 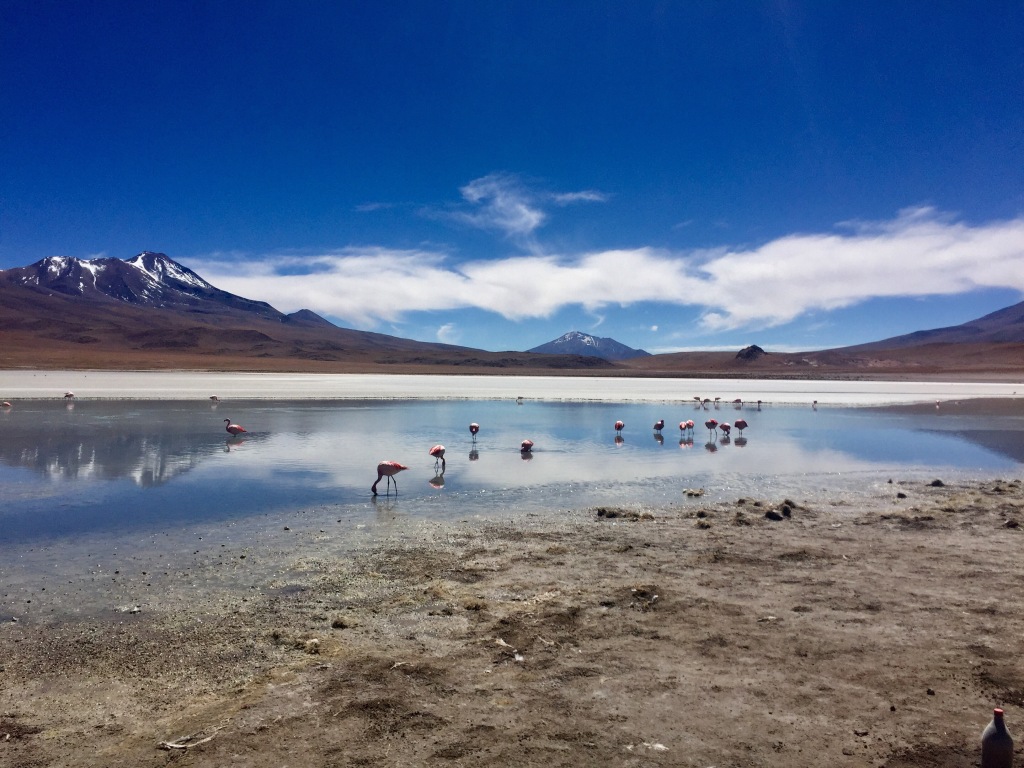 More lagoons followed after lunch with Laguna Honda up first and this was an even paler blue lagoon. The light sandy coloured shores made the lagoon look different to the previous two and I think this one was close to my favourite, despite or because of the lack of flamingos, I can’t decide.

Next was a quick stop at the Rock Tree, basically some rocks in the Desert of Siloli that look like a tree, but I thought the bigger rocks formations were more impressive. 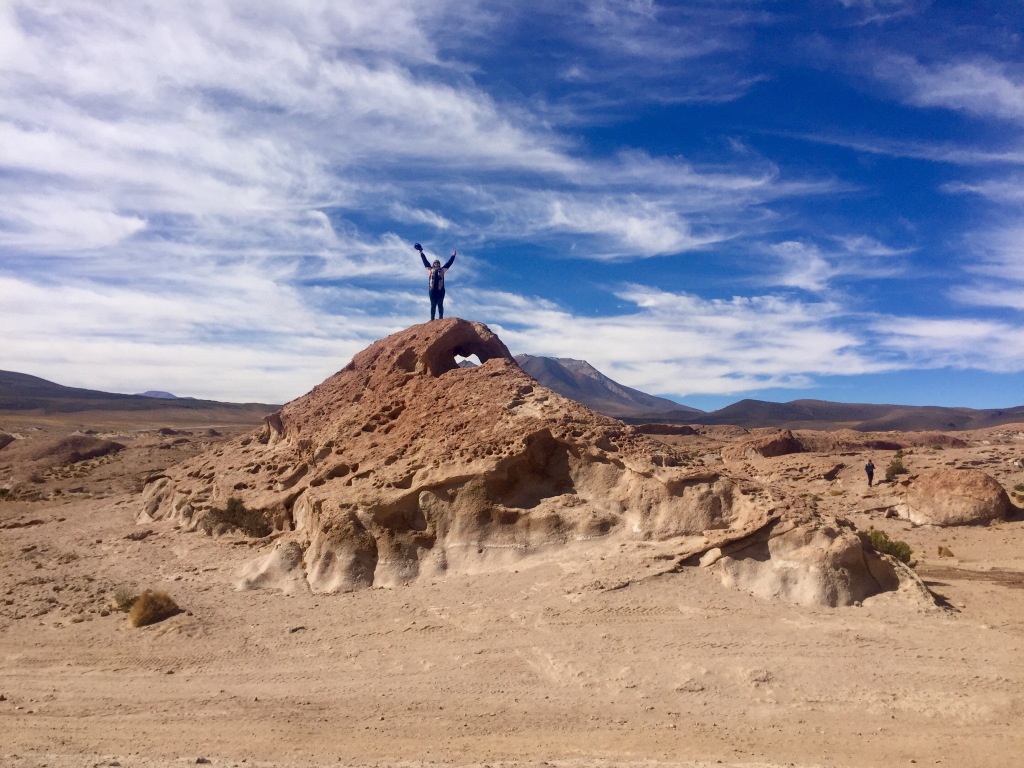 Then we went onto the Laguna Colorada or Red Lagoon (much more helpfully named) and spent an hour walking around the large lagoon in the strong wind. The red colour is caused by the high concentration of red algae and sediments. It was distinctly different to the other lagoons and the offset of red with the surrounding yellow-green shrubs bordering the lagoon made the colour stand out beautifully.

The last stop before our accommodation was the Sol de Mañana Geysers. I’ve never seen geysers before and despite their being quite small, they were still quite impressive. We were free to walk around them however we pleased and I was quite nervous of tripping and falling into one. It was around this point that I realised I’d broken my Kindle, a generous donation from my brother for the trip. I was gutted but it is as least seven years old and had made it all the way around Russia and Asia, and now most of South America so it’s had a good life. Near our accommodation there were hot springs which we went to at night in the brightest full moon I’ve ever seen. This soothed the loss and my aching knees from being cramped in a car boot for two days. 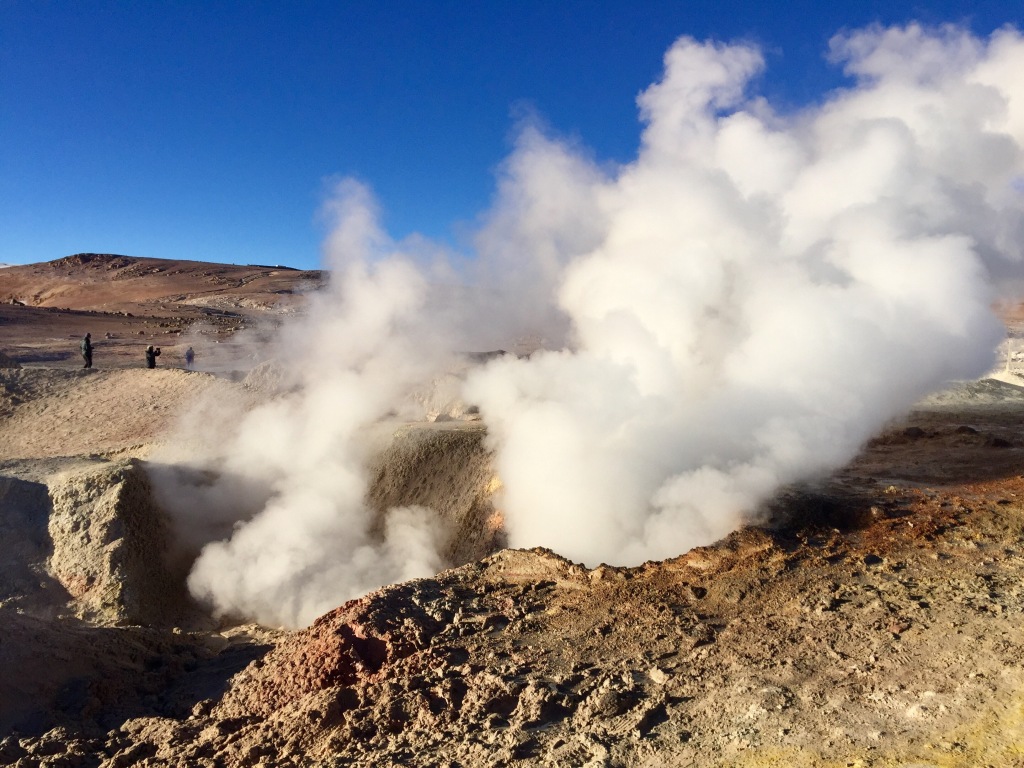 Day 3 – One more lagoon then onto Chile

On the last day, which turned out to be a couple of hours really when you’re getting a transfer to Chile included in the trip, we went to see the Dali desert, named after Salvador Dali. The barren landscape was quite beautiful so I can see why people thought it had inspired his work. Our final lagoon and my final stop before heading across the border to Chile was the Green Lagoon, only it wasn’t green. It was pretty but apparently there needs to be a wind creating a current to see the green colour and the colouring more obvious between 11am and 3pm, not 9am when we visited.

It was just a short trip to the border after this, where I said goodbye to my fellow travellers and joined a bus to the Chilean border. I gave my remaining Bolivianos to the driver instead of the guide – he deserved them more – and waved goodbye to Bolivia, five days ahead of schedule.

Was the salt flats all it cracked up to be? (Excuse the pun)

In my eyes yes it was, and more. I hadn’t expected to see all the lagoons, flamingos, volcanoes, deserts and geysers, as well as the amazing salty landscape. I’d like to go back in the future with my family to see the salt flats in more detail for a couple of days and learn more about the origin, formation and composition. But at least I’ve left something to come back for. Now onto my last three countries of South America: Chile, Argentina and Brazil – the most expensive places on my list!