This is the start of my Patagonia hiking adventure. Until this point I’ve felt like an authentic backpacker travelling around South America: getting an impression of the local culture, tasting the traditional food and learning about the history of each country. For the next month in Patagonia I feel like my trip will be more of a hiking adventure than a cultural one. Patagonia is very highly influenced by European settlers and in the ‘Lake District’ (where I am now) I feel like I’m staying in alpine resort – they cost almost as much too.

To continue a logical path for my trip, I’m travelling through Patagonia from north to south, exploring both the Chilean and Argentinean sides. Three weeks isn’t a ton of time to spend here and thankfully I’ve managed to find some competitively priced flights as days can be lost here catching buses between destinations. Still, I’ll be missing out a lot of really nice places to visit and go hiking. The best way to see Patagonia, I think, is to hire a car. It’s not cheap but you have the freedom to see a lot more of the area than you do if you are constricted to public transport. Hopefully at some point in the future I’ll be able to come back to do just that. But for now, I’ll just be doing a highlights of Patagonia or you could call it a best bits trip.

Pucón was the first stop on my Patagonia adventure and, despite the difficulty of getting a bus ticket there before the Chilean Independence Day holiday, it was worth the wait. It’s a small to medium sized mountain town in the north of the Lake District which sits by the Villarrica lake and the spectacular snowcapped Villarrica volcano. The Lake District area in Patagonia is nothing like the Lake District of Cumbria in England. The rugged mountainous and volcanic countryside covered with a blanket of snow is so peaceful and natural; it looks like it aught to be taken from a remote ski holiday catalogue. People do come to ski and snowboard in Patagonia but much of the quality snow is back country skiing and a very difficult level.

One of the main attractions for adventure-seekers in Pucón is climbing the Villarrica volcano. But once again penalised by the national holiday, the hike wasn’t taking place during the two days while I was in town (just my luck). This was mostly a safety precaution to ensure drunk guides weren’t taking people up an active and potentially dangerous volcano but it was disappointing all the same.

On my first day, after a 12 hour night bus, I decided I would take the day to relax in the luxury hot springs situated an hour from the town. I know I’ve been to a lot of different hot springs on this trip but I’d been assured by the hostel staff that these were really worth it and I was keen to do something with the half day.

The Termas Geometricas are the nicest hot springs I have ever seen or could even imagine. The trip costed £37 (entry and transport included) and although this is a hefty price tag, especially for a backpacker budget, I am so glad it did it. The beautiful setting of the hot springs is a mountain crevice surrounded by a misty forest with lot of different waterfalls. There are 20 man-made steaming pools heated between 35 and 43 degrees centigrade, lined with slate tiles and cute little changing huts. There is also a cosy, modern lodge with an open fire and restaurant where I got a quick cheese and ham toastie. We had three hours to relax here and I made the most of this time by trying out five of the pools. I had planned to try out more but I got talking with a girl from the hostel and so ended up just relaxing.

After a lot of discussion with other travellers at the hostel the night before, I set off the next day to visit El Cañi Reserve and hike the trail. This would be my first solo hiking adventure and I was quite nervous of getting lost or being attacked by a puma. The park ranger at the entrance gave me a map and explained the route. Unfortunately it would be too cloudy to go up to the mirador (viewpoint) but I could go the rest of the way.

It’s meant to be a three to four hike to the top and it was certainly a steep walk for the first two hours. I was going slow and steady but listening to a travel podcast the whole way up (The World Wanderers – highly recommended) made time pass without me noticing. The views were good on the way up but I had a feeling without the clouds they would have been much more impressive. 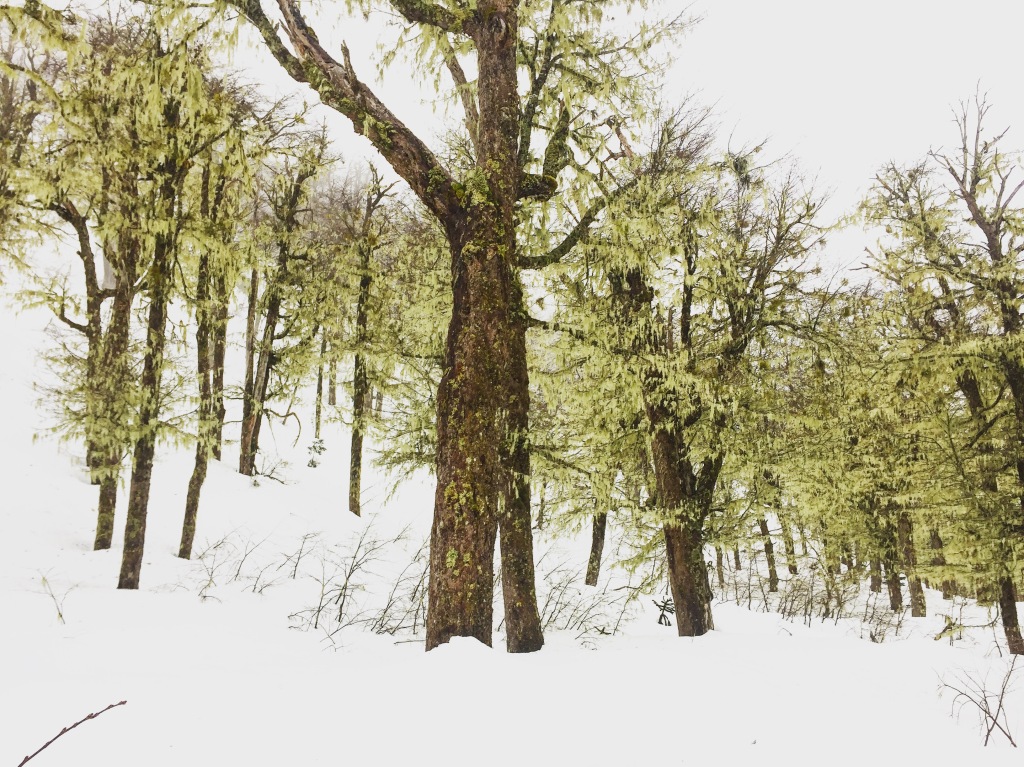 After about two and a half hours I reached the snow and from this point on it was hard to tell where I was going or where I had come from. The white has a magical way of making everything else disappear; each of the trees looked so similar and I wasn’t even sure if I was walking uphill or down anymore. At three hours I saw my first other hiker, a 60-something American I later found out was called Kevin. He was on his way back from the furtherest point and told me there wasn’t far to go. It was kind of nice to know I wasn’t entirely alone – just in case I did get lost.

I continued to follow the path to the frozen lake and up to the bottom of the mirador where the footprints ended. By this point fog was setting in and I decided it wasn’t worth hanging about. I quickly ate the empanada I had brought in my backpack for lunch and started the return journey.

Not paying close attention to where I was walking, I managed to stumble onto a side trail at one point. It wasn’t until my boot fell through the snow leaving me with one leg buried to the hip and the other bent crouching above the snow that I realised I had gone the wrong way. Luckily this has happened a couple of times snowing before so I wasn’t scared, I just knew it would be wise to climb out of the whole as soon as possible. 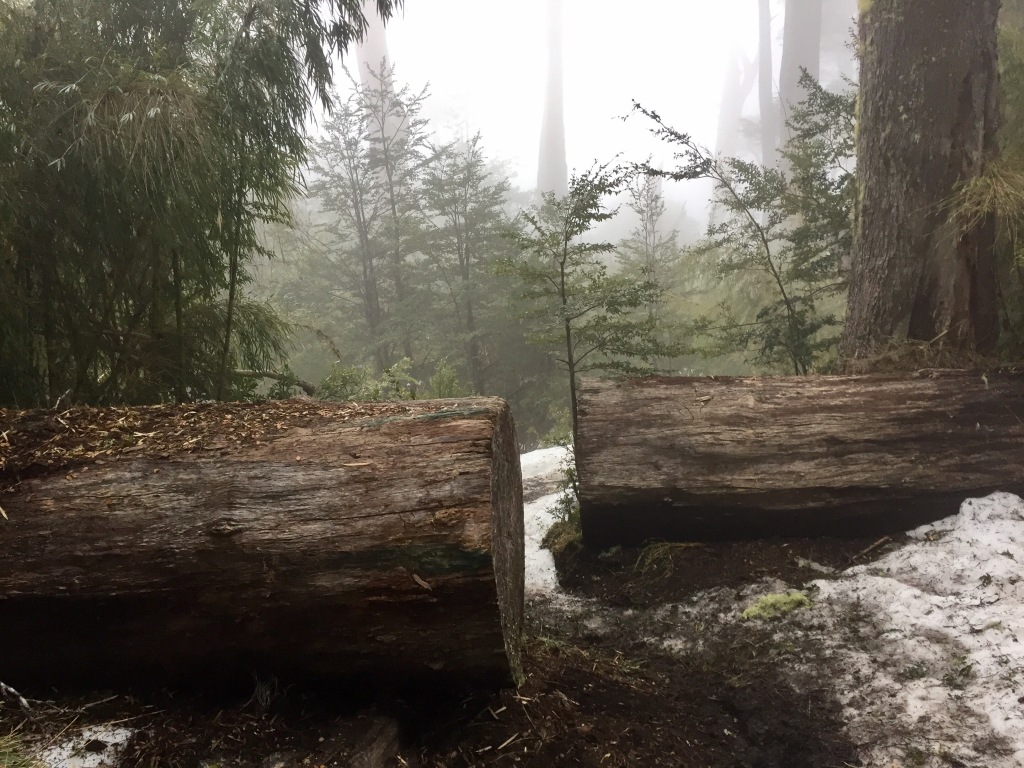 Back on the main trail, I started to speed up my decent as it was starting to rain and I didn’t want to get stuck at the top of the mountain if the weather turned. Once I lost the snow, I started jogging my way down through the mud, now very damp and slippy. I caught up with Kevin and walked the rest of the way back with him. We were even lucky enough to catch a return bus after only 10 minutes of waiting. In total it took me six hours: four up and two down, so I was quite happy with that. The walk was challenging and peaceful – a great introduction to Patagonia. 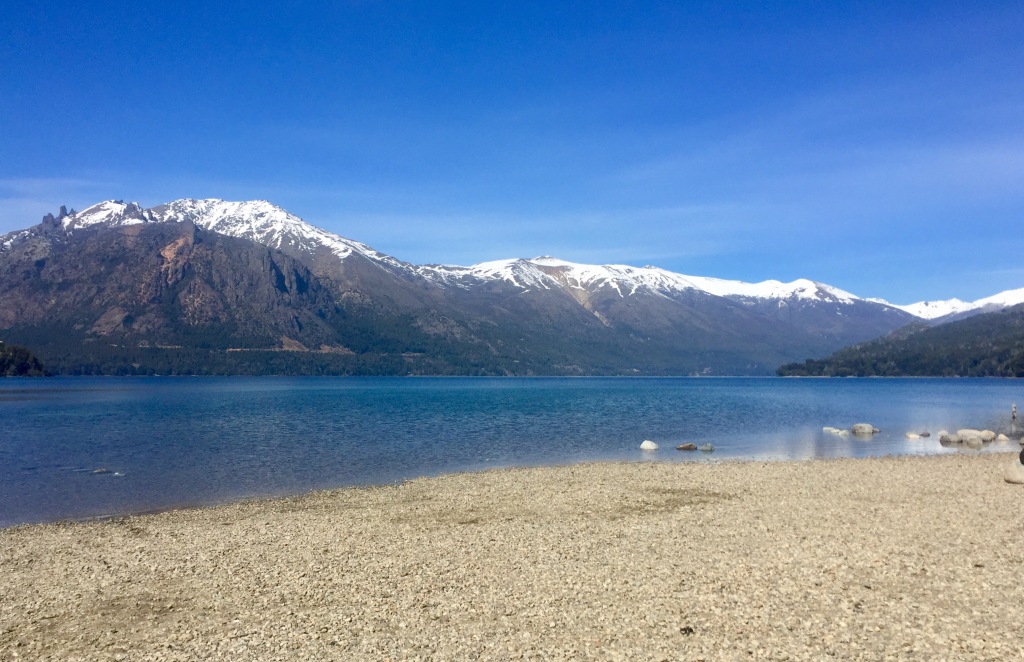 My next day was spent catching two buses across to San Carlos de Bariloche in the Argentinean Lake District. Bariloche is a well-known stop on the Patagonia traveller route and a great starting place to hike from. It’s a medium sized city and loses some of the alpine charm in its bustling centre but I stayed in a wooden lodge-style hostel (41 Below) so it still felt outdoorsy and relaxing. In fact without realising it I had selected a vegan hostel. I don’t particularly believe in the idea of being a vegan but it was nice to stay somewhere that was at least trying to be eco-friendly and the other travellers were really friendly.

On my first day I joined a group from the hostel doing a short walk to some waterfalls nearby. This gave me a chance to experience the local buses system that uses contactless ‘sube’ cards which are very similar to Oyster cards in London. The walk wasn’t challenging but it was nice to chat to some new people and enjoy the countryside. 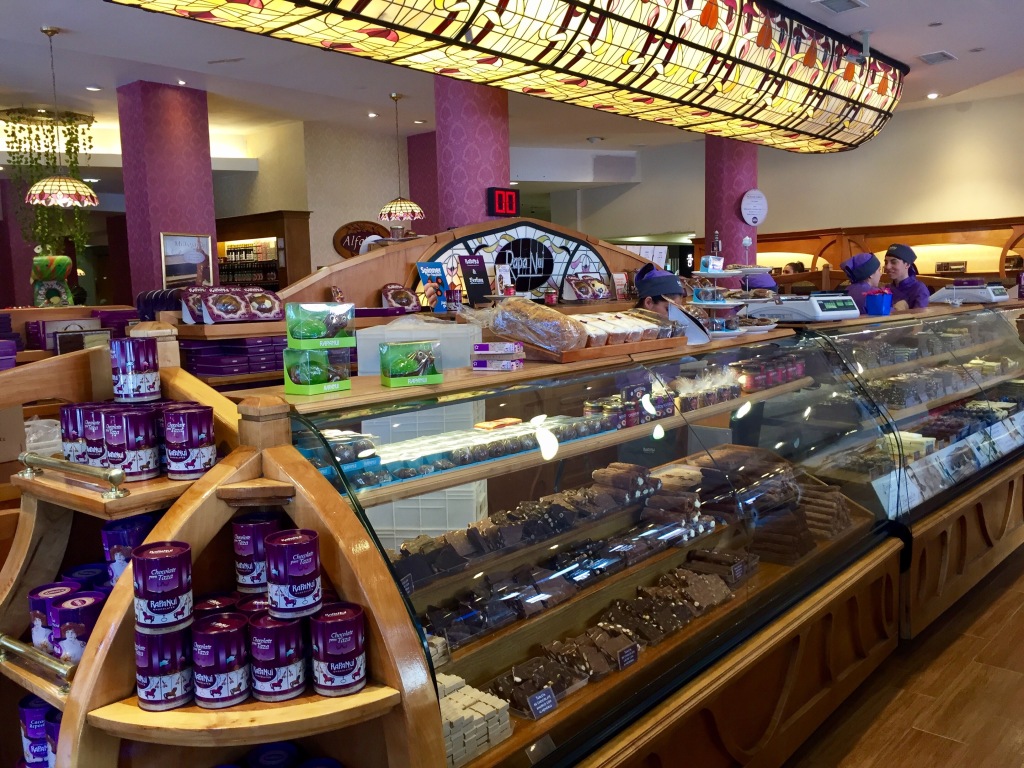 I spent the next day trying out the famous Bariloche chocolate in Rupa Nui, a chocolate shop version of Harrods. It had a very nice cafe which served delicious raspberry hot chocolates and they let me sit there for a few hours typing away to update this blog. This doesn’t sound like much for a whole day’s work but with the quality of the WiFi in Patagonia and a fair amount of travel planning to do, it took up most of my day.

Finally a full day of hiking came after this. I asked around the hostel about nice hikes and decided that the route in El Parque Municipal Llao Llao (pronounced like Jao Jao) would be a good circuit that is well-signposted and had the added bonus of no park fees. Well lucky it was well-signposted because I brought the wrong map and had no clue where I was going. I took a picture of the map in the window of the closed tourist office and used this as my guide for the whole route.

To be honest I’m not sure how long the route was in total and I wasn’t walking very fast, but it took me about five hours. It was a shame I’d forgotten to take lunch because there were loads of great picnic spots. Instead I ate the rest of my packet of biscuits and thought of the sandwich I would get from the bakery once back in town.

I started by walking through the forest to a clearing with some Arrayan trees which were sandy yellow colour that waved and wound in strange directions. These are special in Argentina and you can see why because they are quite unusual. After this the path continues on to the beach of the lake with a number of different viewpoints. The beautiful snowcapped mountains surrounding the lakes have a real sense of calm and the route for this hike brought you close to lots of the different peaks.

Towards the end of the circuit, the path leads off steeply to climb the Cerrito Llao Llao. It’s not a difficult path to climb and I was surprised that it was so quiet (I only saw two ladies on the hill) because the views were truly spectacular. You could see a long way across the Nahuel Huapl National Park and little islands were dotted across the lake like a sprinkling of floating trees. The green of the surrounding forests against the dark blue of the lake and the white of the snowy mountains was mesmerising and I’m not sure there is a better view of the area. Even without the sunshine, I couldn’t have imagined a more perfect sight. 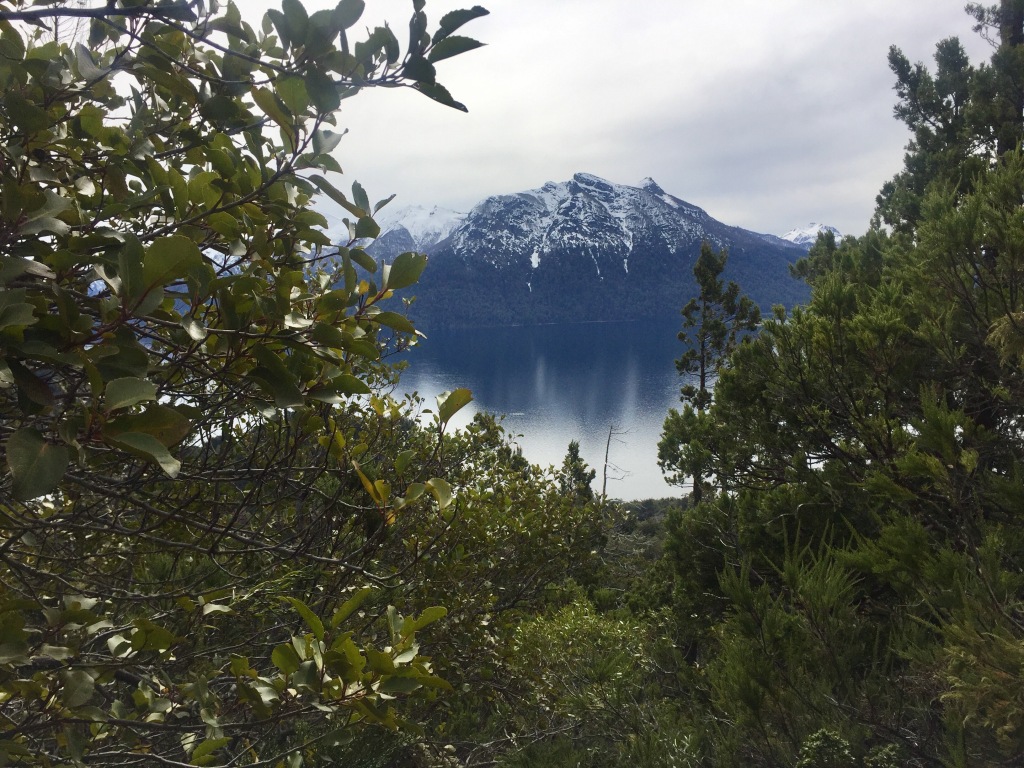 From Bariloche I’m skipping out a chunk of Patagonia to fly to El Calafate and visit the world famous Los Glaciares National Park. Expect ice, ice and more ice for the next post!